Delta Manufacturing was the first company making a 1/18 scale car, the Pocket Rocket. Another 1/18 scale race car was introduced in late 1981, the Parma Cheetah.

If you compare pictures, you can see Parma went a different road with chassis design. The Cheetah got a folded Lexan monocoque chassis and a torque tube with sprung motor mount, very similar to the European 1/12 scale cars of the early 1980s. The front end uses a Kydex cross bar and RC12E steering blocks.
Power source for the Cheetah was a Parma “Little” Ferrari, based on the Kyosho Little Sports motor. The complete kit came with a 6 cell Sanyo 250 battery, mini resistor and reverse switch. Parma also made some very nice bodies for the 1/18 scale cars as the Porsche Group C, VDS CanAm, Sorbello Sports and the beautiful Lancia Beta Montecarlo. Please see our body gallery 1/18 scale for some of them.
Beside bodies there were also option parts as brass and steel pinion gears, silicon coated tires for slippery surfaces and a lexan cover for replacing the heavy receiver case. Even a ball diff was released later.

This Parma Cheetah 1/18 was donated by Chris Arnold, who was a designer and a driver for Parma Team UK. Thanks for supporting Classic RC! 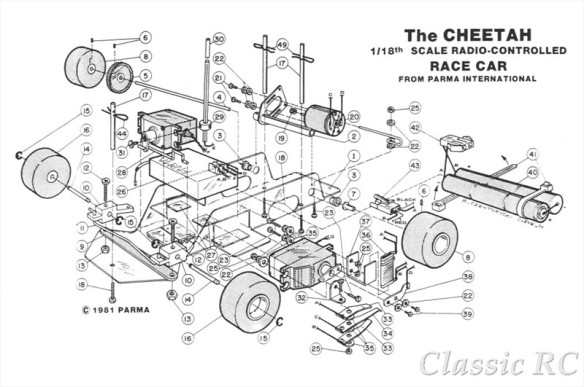