John Thorp of Thorp Manufacturing was famous for groundbreaking ideas at his 1/8 gas cars since the early days of RC car history. Later he also was making hop up parts for offroad cars and selling maybe the first professional grade tools for car use. In 1981 he also introduced a 1/12 car, the Thorp Hammer.

The Thorp 1/12 was designed as a clean, lightweight car. Chassis and radio tray were made from epoxy fibreglass, the rear axle and motor mount assembly was folded from a sheet of aluminium, acting also as motor heatsink. For the front end an epoxy glass beam was used, mounted on 5° aluminium castor blocks. The steering blocks were borrowed from the Associated RC12E. A similar type of frontend was used later also at the Parma Euro Panther.
The Hammer was sold from 1981 as kit  for the production class using a straight axle and another version with balldiff and bearings for the modified class. Both versions were using the unique Thorp wheels, looking very similar to their 1/8 wheels. The balldiff was designed of course by John Thorp himself and sold for use with other 1/12 cars too. 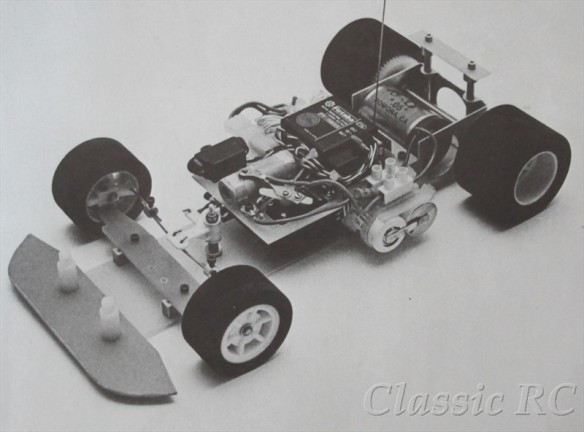