Beside the Thorp Hammer 1/12 car, John Thorp also sold a balldiff for the 1/12 class. This was used at the kit version for the modified class and also sold for the Associated RC12E and other cars. As with most of his products, John Thorp went with a different route when designing this diff. He used the machined Thorp nylon main gear, also the same array of thrust races and balls as found at other balldiffs, but instead of the typical belleville washer (disk type spring) he went with a classical spring for a larger range of adjustment. Also the usual lock nut was replaced by an allen screw, even the diff hub was different so no Associated, Parma or other usual 1/12 wheels could be used but the Thorp 1/12 wheels. In the end this means, you could change the rear wheels without readjusting the diff. We know of just one other ball diff where a tire change like this was possible, the Schumacher diff developed by Cecil Schumacher, the inventor of the ball diff for RC use.

This Thorp ball diff was introduced in 1981 and actually a scaled down version of their 1/8 scale ball diff, sold for the Associated and MRP 1/8 gas cars. 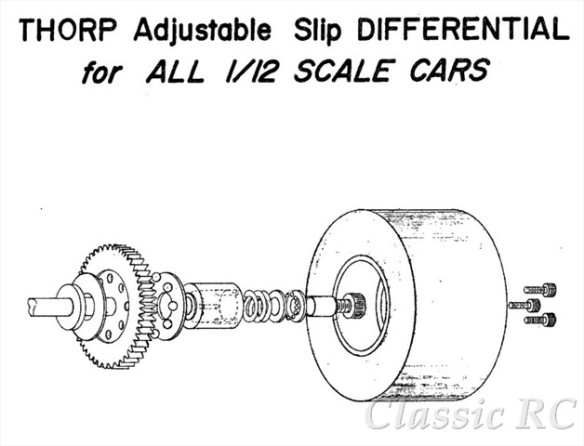