In the early days of RC car history, cars were of 1/8th scale usually. This changed in early 1971 when Jerobee introduced the first 1/12th scale car ever – the Jerobee McLaren MK8B. Powered by a gas motor as all early cars, in this case by a Cox Babe Bee 0.049 with integrated fuel tank and pull starter. Intended as low cost car for anyone, the design was kept simple for easy operation and being sturdy in use.

The chassis and most other components were made as moulded plastic type. Even the beautiful McLaren body was moulded from Cycolac plastics as the Porsche Bandero, another early Jerobee body. Lexan bodies were introduced three years later at their Super Jerobee car. The easy of use could be found also at one interesting detail, the mounting of the body. The front of the body was clamped to the chassis forming some sort of hinge so just one body clip had to be used at the rear. Very easy to use and quick access to anything below the body. Tires were of the moulded rubber type with hard compound at the front and soft at the rear.
As you can see from the pictures the McLaren MK8B was sold as RTR (Ready To Run) with receiver and servos made as integrated brick type unit. The Jerobee Comando transmitter was one of the first steerwheel units with similar handling as the Futaba FP-T 2F later. Beside this RTR version also a basic car without radiocontrol was sold so a Kraft 2-channel radio or similar could be used for completing the car.
Later some drivers were converting their Jerobee cars into electrics, replacing the Cox motor with motor and batteries from an electric tool. This was the start of the 1/12 electric cars or the “little wee ones” as the 1/8 gas drivers were calling them. The plastic chassis made for this car was used later with a lot of other cars from Bolink and other brands.

update:  we found comment at a 1971 magazine, the Jerobee car was introduced at the Chicago Hobby Show the very same year. So year of introduction updated.

We don´t have a Jerobee McLaren MK8B in our collection but had the unexpected chance for making pictures at a hobbyshop. Just a quick blowing off the dust of 40 years and here we go. 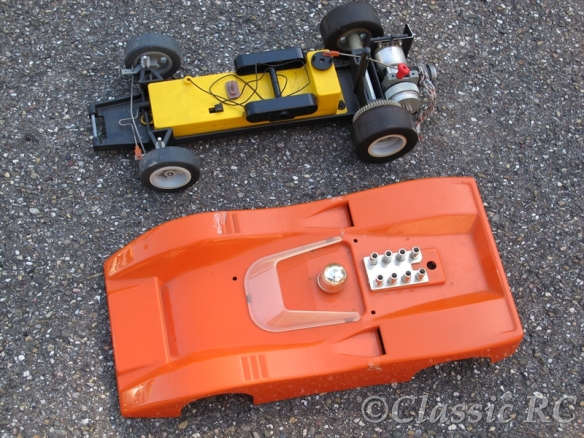